What you need to know about Robusta versus Arabica coffee

There are over one hundred different types of coffee beans on the market today, but there are only two types of coffee which are widely grown and commercialized: Robusta and Arabica. The differences between Robusta and Arabica coffee are significant. Knowing more about each will help you make the right choice for the cup of Joe you might like best. 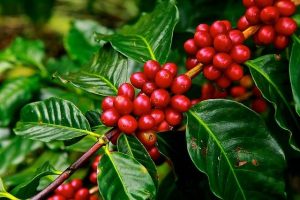 What is Robusta coffee?

Robusta coffee is the coffee made from the Coffea Canophera plant. From its origin in Central Africa, today it is grown mainly in Vietnam, Indonesia, India, and some African countries. Robusta represents about 40% of the total world coffee production, with Vietnam as the largest Robusta coffee producer (40% of global production), followed by Brazil (25%), Indonesia (15%), and India (5%).

What is Arabica coffee? 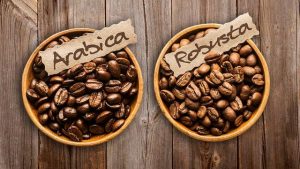 The difference between Robusta and Arabica coffee

When roasted, the two types of beans look similar, but they are actually very different from each other in terms of caffeine content, acidity level, taste, and flavor.

For people who want a high caffeine content, Robusta will be a better choice as it has almost double the caffeine of Arabica. Robusta beans contain 2.4% – 2.7% of caffeine compared to 1.3% – 1.5% for Arabica.

But caffeine is just one factor, with taste being the other.  Because Arabica has higher acidity than Robusta, Arabica coffee is richer with a variety of pleasant fruity flavor notes such as melons, berries, and nuts. Robusta coffee is more earthy, rough, and coarse in flavor. For coffee drinkers who like fruity and pleasant notes, Arabica is the winner.

Depending on other factors like roasting profiles and brewing methods, the taste between the two types of coffee is also different. Arabica is much sweeter as it contains as up to twice the sugar. However, as mentioned, coffee taste depends largely on roasting, brewing process and storage duration. In general, darker-roast coffee delivers bolder taste than lighter-roast coffee.

On a coffee plantation, the Arabica tree is more vulnerable to insects and plant diseases, and therefore requires more pesticide and climate stability. Arabica trees are preferably grown in a higher altitude (usually a mile high or more) with a temperature between 60 – 75oF. Arabica is also a more popular coffee as it accounts for 60% of the world coffee production while Robusta takes only 40% of the total production.

It is difficult to say which coffee is “better” than the other as each type of coffee has its own advantages. Coffee roasters choose between Robusta and Arabica to serve their targeted consumer niches. For our passionate coffee drinkers who require both highly caffeinated coffee as well as delicious taste, we use a blend of both to make BuzzBrew Coffee. We use a majority of select premium Robusta beans to deliver the caffeine, blended with Arabica beans to retain a delicious flavor. We think it’s the best of both worlds.

This website uses cookies to improve your experience while you navigate through the website. Out of these cookies, the cookies that are categorized as necessary are stored on your browser as they are essential for the working of basic functionalities of the website. We also use third-party cookies that help us analyze and understand how you use this website. These cookies will be stored in your browser only with your consent. You also have the option to opt-out of these cookies. But opting out of some of these cookies may have an effect on your browsing experience.
Necessary Always Enabled
Necessary cookies are absolutely essential for the website to function properly. This category only includes cookies that ensures basic functionalities and security features of the website. These cookies do not store any personal information.
Non-necessary
Any cookies that may not be particularly necessary for the website to function and is used specifically to collect user personal data via analytics, ads, other embedded contents are termed as non-necessary cookies. It is mandatory to procure user consent prior to running these cookies on your website.
SAVE & ACCEPT
Shopping cart0
There are no products in the cart!
Continue shopping
0
Scroll to Top